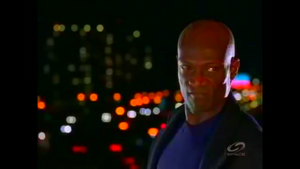 The Vardians are an extraterrestrial species known for their distinctly aggressive behavior.

They are super strong and have some telekinetic ability, as well as being able to move briefly at high speed and heal themselves, as Marak was shown as being able to heal quickly even after being shot in the neck, with seemingly no ill effect. Nestov was scared of the Vardians - claiming they could break a person's neck with one finger.

Zin is the only Vardian seen to be able to manipulate energy like the Cirronians do.

Retrieved from "https://aliens.fandom.com/wiki/Vardian?oldid=173973"
Community content is available under CC-BY-SA unless otherwise noted.