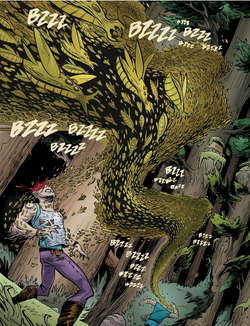 The Vanth are insectoid creatures supposedly native to the world of Korvath. However according to the Korvathians they just appeared out of the blue. Amelia Earhart believes that like her plane they were brought from another world.

The Vanth resemble green four-eyed flying leeches. They travel in swarms and are considered dangerous to the Korvath inhabitants. Apparently they are carnivorous and attack their prey engulfing them in a cloud of death.

Retrieved from "https://aliens.fandom.com/wiki/Vanth?oldid=182780"
Community content is available under CC-BY-SA unless otherwise noted.