"But it was that extraordinary look of alive intelligence that was the most uncanny thing about them. No one, no matter how little he knew of natural history in general or of the Moon's Vegetable Kingdom, could see those wonderful flowers without immediately being arrested by this peculiar character. You felt at once that you were in the presence of people rather than plants; and to talk with them, or to try to, seemed the most natural thing in the world."
―Tommy Stubbins 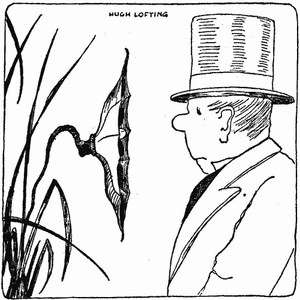 Vanity Lilies are a sapient species of plants native to the Earth's moon.

Like most plants, Vanity Lilies are sessile creatures, although still capable of a wide variety of movements. Their stems are long and slender. and their flowers are trumpet-shaped, with a diameter of about 18 inches (~ 45.7 cm). The flowers are cream-colored with patches of violet and orange grouped around a central black tongue. Their leaves are deep olive-green. Tommy Stubbins has described them as the most beautiful flowers he's ever seen, and compared their movements to a group of people "whispering and gossiping at a party".

One of the most notable abilities of the Lilies is to produce a wide variety of different aromas at will, ranging from a plethora of agreeable scents to some that are so noxious they might induce faintness. They also possess the faculty of sight, even though they don't have visible eyes. They can, in fact, detect not only light, but also colors and images. Like all life forms of the moon, they can live for centuries.

Vanity Lilies are a particularly intelligent, friendly and gregarious species, standing out even amidst the other, similarly sapient flora of the moon. Dr. Dolittle credited their intelligence and helpful nature to explain how he managed to learn their language and converse with them in a relatively short period.

Their language largely consists of movements, although the type of movement differs between the idiom they use among themselves and others that are employed to speak to different kinds of plants, as well as to the bees that come to feed on their nectar and pollinate them.

They spend their days in idle chatting and, when questioned about whether they wish they weren't sessile, claim that they feel no desire to leave their spots whatsoever, and are very content to communicate with more distant individuals by sending messages via the bees and other insects.

The reason they've been named Vanity Lilies is that they're very conscious about their looks and get upset if birds or insects mess with their delicate petals or pistils. Those who grow close enough to ponds or streams love to look at their own reflections in water.

Retrieved from "https://aliens.fandom.com/wiki/Vanity_Lily?oldid=164916"
Community content is available under CC-BY-SA unless otherwise noted.