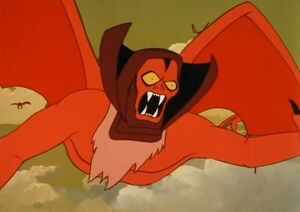 The Vampire Men are a hostile race of winged humanoids with red skin, sharp fangs and yellow eyes which inhabit the planet Sagar.

They can release destructive energy discharges. Unlike many types of vampires, the Sagarian Vampire Men seem to be diurnal. They live in the Vampire Mountains.

Retrieved from "https://aliens.fandom.com/wiki/Vampire_Man?oldid=181905"
Community content is available under CC-BY-SA unless otherwise noted.