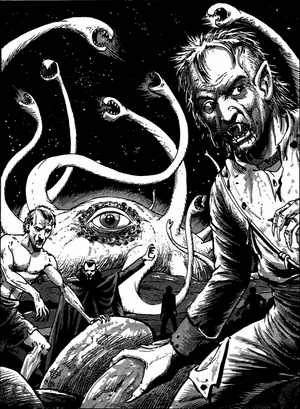 Rifts
Vampire Intelligences are among the weakest and most numerous form of alien intelligence in the Megaverse, for relative values of both those terms. They are the creators and the sources of vampirism, which they spread across reality in order to feed and rule.

A Vampire Intelligence is an immense creature with no particular shape. They are massive mounds of flesh 100 to 200 feet across and 12 to 24 feet high. This central mass is surrounded by between six and twelve tentacles, each up to 200 feet long and tipped with an enormous fanged mouth. The main body has a single huge, central eye, surrounded by a hundred small eyes colored either red or yellow. A Vampire Intelligence weighs between 60 and 120 tons.

Vampire Intelligences feed mainly off magical energy. They make their lairs on top of ley line nexus points, where they can continually feed on huge amounts of magical energy. This feeding process powers their magical abilities and keeps other creatures from effectively using the nexus' energy for themselves. They also require a steady supply of humanoid blood, although much less than would be expected of such a large creature.

Vampire Intelligences have no means of reproducing other than creating vampires. It is unknown how, exactly, they come into being, or even if new ones can be "born" at all.

As alien intelligences, Vampire Intelligences are effectively deities and wield enormous power. They are, however, considerably weaker than most such beings. They also share a variety of traits with their vampire minions.

Vampire Intelligences are supernaturally immune to most forms of damage. They can survive a nuke with a 1.2 Megaton yield. They can only be seriously injured by magical means, or by wood, silver, or running water. All other forms of attack (lasers, particle beams, missiles, artillery shells, etc) inflict far less damage on a Vampire Intelligence than if they struck another being or structure.

Even when struck with weapons capable of injuring it, a Vampire Intelligence rapidly regenerates, and can even heal severed or destroyed body parts in a matter of minutes. This ability is drastically slowed when the monster is exposed to natural sunlight.

A Vampire Intelligence can turn any willing humanoid creature into a Master Vampire, and can create a new one for every 1,000 vampires descended from its bloodline. It needs 2,500 vampires to materialize on a given planet, although it can remain there if the number of vampires then drops below that threshold. It is also able capable of creating secondary vampires from willing or unwilling humanoids. If the Intelligence is killed, all of its vampires immediately die.

Vampire Intelligences are solitary creatures, viewing others of their kind only as rivals. Among their vampire spawn, they are godlike overlords, but generally do not involve themselves in the day-to-day affairs of their empires, relegating these tasks to the Masters they create.

While Vampire Intelligences and their progeny have little in the way of their own technology and architecture, Vampire Intelligences exhibit a distinct preference for pyramidal structures as homes. This is because the shape of a pyramid amplifies and directs magical energy, helping the monster feed.

Vampire Intelligences are ancient beings of unclear origin. They existed in the long-ago times when the Old Ones were sealed away, and may be a weaker sub-species of that race, but escaped imprisonment on account of their relative weakness.

Various vampire incursions have occurred on Earth in the past. The earliest of these invasions took place in the age of Atlantis, brought about when the way to Earth was opened by disastrous Atlantean experiments. These invasions were eventually beaten back, but the Vampire Intelligences eventually produced more vampire plagues on Earth. The most destructive of these took place in Europe in the mid-1300's, worsening or perhaps even causing the Black Death. Another invasion may have taken place in Central and South America, possibly explaining the prevalence of human sacrifice in pre-Columbian societies. At no point did these invasions grow to the point when a Vampire Intelligence could personally arrive on Earth, and in any case there was not enough magic to sustain them.

This changed with the Coming of the Rifts in 2098. After that, Earth was infused with enough magical energy for Vampire Intelligences to live there, and the monsters invaded Central America, establishing multiple warring empires there.

Retrieved from "https://aliens.fandom.com/wiki/Vampire_Intelligence?oldid=187609"
Community content is available under CC-BY-SA unless otherwise noted.