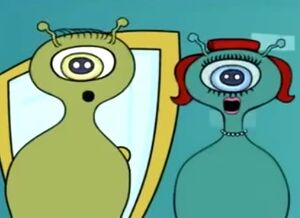 My Parents Are Aliens

The Valuxian are a shape-shifting race from the planet Valux.

Two of their species crash land on Earth and while they wait to be rescued they decide to blend in as much as they can. Taking the names Brian and Sophie Johnson, they decide to become foster parents. They adopt three orphaned Human children: Mel, Josh and Lucy Barker. The children soon discover that the Johnsons are in fact aliens from the planet Valux, who crash-landed on Earth when Brian tampered with the controls of their spaceship. The house they live in is actually a morphed form of their spaceship. They also have the ability to morph into other people. Brian and Sophie have a very limited and muddled knowledge of life on Earth, and the children must do their best to help them acclimatise. No one outside the family must ever learn that they are aliens, or they will be taken away for scientific testing, and the Barkers will lose another set of parents.

Retrieved from "https://aliens.fandom.com/wiki/Valuxian?oldid=185270"
Community content is available under CC-BY-SA unless otherwise noted.