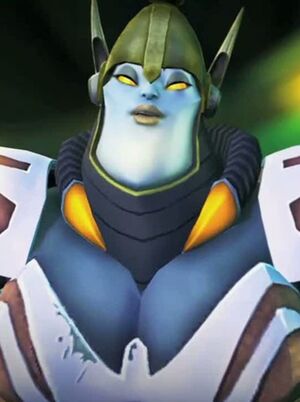 Aggressive species of robotic machines governed by their females

Valkyries were nomadic robotic humanoids, feared throughout the Polaris Galaxy for pillaging and hijacking passing ships; even more so then the dread Space Pirates.

Valkyries are a robotic species, though the creators of the machines, or whether they were even created is unknown.

Despite being robots, Valkyrie have two genders, one being male and the other being female. However since the male Valkyries have long been banished by the female Valkyries, it's unknown how they look. How the machines produce is unknown.

Years ago, the Valkyrie settled on unnamed world that served as a very important colony world. The history of the Valkyries before this point is unknown. At some point, the Erebus Supernova ravaged the Polaris Galaxy, and obliterated the Valkyrie colony.

The Valkyrie faced another crisis when volcanic activity on Vapedia forced the Valkyries to move large sections of habitable land into the sky, such as Valkyrie Citadel, via massive fans. When volcanic activity died down, most of the floating bits of habitable land were placed back onto the surface of Vapedia, except for the Valkyrie Citadel which remained above the surface of the planet for defensive reasons.

The Valkyries became notorious for raiding spaceships across the Breegus System, even more so then Space Pirates.

During the Time Crisis that struck the Polaris Galaxy and beyond, the Valkyries were hired by Dr. Nefarious to serve as his muscle in exchange for Nefarious using the Great Clock to go back in time to prevent the loss of Valkyrie world lost during the Erebus Supernova.

Retrieved from "https://aliens.fandom.com/wiki/Valkyrie_(Ratchet_%26_Clank)?oldid=174690"
Community content is available under CC-BY-SA unless otherwise noted.