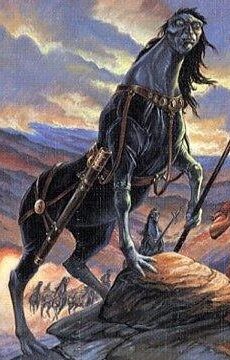 Edgar Rice Burroughs
The Va-gas are one of the three races that inhabit the interior of the Earth's moon.

They are swift and strong quadrupeds, and capable of carrying people upon their backs. They have four limbs, and their front limbs function as arms and as legs. They are capable of standing upon their hind legs with the same ease as any Human. They have lavender skin that can get almost purple, and skulls that are broader than Human skulls but otherwise identical.

Although technically omnivorous, the Va-gas cannot survive without regular consumption of meat. Since natural components of the Moon fauna such as the Rympth and the Flying Toad are poisonous, there is a very limited supply of species available for them to prey upon, leading them to cannibalize rival tribes as well as the sapient humanoid U-gas.

The Va-gas are highly cannibalistic and warlike. Since most remaining animal life is toxic to them, they're known to prey both on their own kind and on U-gas. The U-gas, in turn, are known to breed captive Va-gas for meat, as do the Kalkars.

They speak the same idiom used by the other races of Va-nah: a tonal language, described as sounding very much like music.

When the Kalkars invaded they brought one thousand Va-Gas with them, it is unknown how many (if any at all) are on Earth now. 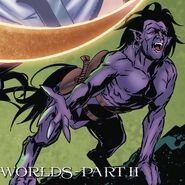 Retrieved from "https://aliens.fandom.com/wiki/Va-ga?oldid=199943"
Community content is available under CC-BY-SA unless otherwise noted.