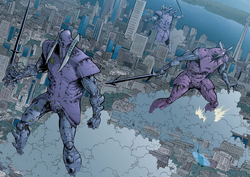 These giants though technological reveal that they possess an internal system like a human body. They have smaller life-forms, possessing a hive mind, which act as a form of nervous system for the construct, performing tasks to maintain its systems. Even as a corpse, the V'Ran giants' systems are still able to function with several vessels contained within. In addition there seems to be a program in which the giants become subservient to whoever defeats them, allowing the Front Line to use one as a base. The V'Ran Giants can adapt to any environment and survive in deep space with its masters using them to cross interstellar distances.

The V'Ran are able to control the giant's functions from its head connecting themselves directly. Also they possess a distress call function that can be activated manually, signalling other giants to rendezvous to its position for a second invasion. 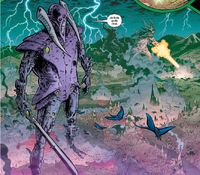 The giants are capable of creating melee weapons such as swords from their hands. They can use their hands to launch devastating blasts of energy that can vaporize anything. Their faces appear to be unique with each giant possessing a terrifying visage with a maw that spews out plasma.

However despite all its formidable weaponry, they are susceptible to an artificially alien-created energy virus.

Retrieved from "https://aliens.fandom.com/wiki/V%27Ran_Giant?oldid=125222"
Community content is available under CC-BY-SA unless otherwise noted.