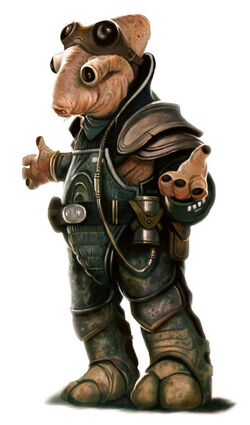 Star Wars
The Utai are one of the two Near-Human races that inhabit the planet Utapau, the other being the Pau'ans. Their most distinguishing physical characteristic is their large beady black eyes located on short thick eyestalks. They are pale brown in color and are much shorter than their Pau'an cousins.

Utai and Pau'ans live along in harmony in their underground cities, which are situated in the sinkholes and caverns of the planet. In their society, Pau'ans usually take the roles of leaders, politicians and intellectuals, while Utai are generally better suited to work as laborers.

Both Utai and Pau'ans are Near-Human species, meaning that they are genetically related to Humans. That probably means that both races are descendants from some Human civilization that colonized planet Utapau in ancient times. Of all Near-Human species ever seen in the Star Wars universe, Utai are the most "alien-like". This is probably because they evolved in the underground, separated from Pau'ans. Only relatively recently, when the climate on the planet's surface became almost unbearably windy and dry, that Pau'ans too migrated to the sinkholes and merged their society with the Utai's.