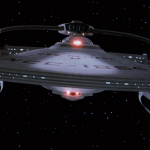 IN THE 23RD CENTURY.... Captian Clark Terrell and Commander Pavel Chekov, of the Federation starship Reliant, have the unfortunate luck of discovering an old enemy, KHAN NOONIEN SINGH on hellish desert planet Ceti-Alpha 5 while searching for a test site suitable to the requirements of Project Genesis, a top-secret Federation sponsored terraforming device. Their luck gets even worse as they are captured by and reacquainted with Khan and his surviving  followers.

Khan, went insane as a result of his struggle to survive the ecological destruction of Ceti-Alpha 5, which resulted in the death of his wife, Lt. Marla McGivers. He now seeks answers that will help lead him to successful revenge on the Starship captain who sentenced him to be exiled to the now dead planet 15 years previously. During his imprisonment, Khan discovered a species of parasite native to Ceti-Alpha 5, whose young gestate in the brains of mammals. Having witnessed a fatal syndrome in several of his followers as a result of this parasitical infection, (which leads to docility, madness and eventual death), he deliberately uses the larvae to infect Terrell and Chekov, in order to gain control of their minds and extract information from them. This enables him to commandeer their orbiting starship, the U.S.S. Reliant and set a deadly trap for his arch enemy, Admiral James T. Kirk.

The U.S.S. Reliant, registry number NCC-1864, was a Miranda-class starship. Smaller than a constitution class starship like the U.S.S. Enterprise NCC-1701, its specialty was deep space assignments to some of the more perilous and uncharted edges of federation space. For this reason its weaponry systems were a highlight of its overall design to enable better self defense in situations where help might not be available due to the exceedingly distant and dangerous nature of its missions.

Khan, now in command of the Reliant, after marooning her crew to the surface of Ceti-Alpha 5, contacts Spacelab Regula 1  in order to lure Admiral Kirk into a trap. Using Chekov, under the influence of Ceti-Eels to deliver a message to Dr. Carol Marcus, (chief scientist and developer of Project Genesis), Khan falsely informs her of Starfleet Command's decision to take control of the project including bogus orders to release all relevant data and materials including a prototype device called the GENESIS TORPEDO to the custody of the Reliant. Khan, via Chekov, deliberately states that "Admiral James T. Kirk" was directly responsible for the orders as a way of ensuring that Kirk will be contacted, and thus ensnared in an ambush that he has planned for the Enterprise as it makes its way to Regula 1 to investigate.

Dr.Marcus in turn then attempts to contact Admiral Kirk onboard the Enterprise to confirm the order. Khan jams the communication signals from Regula 1 to the Enterprise, scrambling the message enough that Kirk is unable to make sense of the situation. This arouses his suspicions, leading him to contact Starfleet Command. The Enterprise, is ordered to investigate the situation and as a result, the Enterprise redirects its course to Regula 1 and shifts from a training cruise under the command of Captain Spock, to regular duty. Admiral Kirk is then obliged, under regulations to assume command of the ship. The scene is set for Khan's deadly attack on Kirk and the crew of the Enterprise.

At Warp 5, Enterprise makes her way towards Space Lab Regula 1. Meanwhile, Kirk is trying to make sense of the situation. He initially assumes that some kind of garbled communications are to blame for the misunderstanding. But never the less, he is restless. He decides to consult Spock about the matter and in doing so shares a classified tape containing information regarding project Genesis.

Dr. McCoy joins Kirk and Spock in the dissemination of the tape which goes into detail about the stages of the experiments done by the scientists and the process that is called the Genesis effect. A computer generated simulation illustrates how it is delivered via a torpedo to an object similar to a lifeless moon. Upon impact, it instantaneously reorganizes the matter at the sub-atomic level into a reprogrammed matrix designed to emulate Earth like conditions suitable for a variety of lifeforms.

Dr. McCoy is unnerved by the colossal nature of the Genesis effect. McCoy argues that if the Genesis torpedo should fall into the wrong hands, it could become the ultimate doomsday weapon which would then be nefariously used to create universal armageddon. Spock attempts to bring logic into the conversation which irritates McCoy even further but before an irate McCoy can finish insulting Spock, Lt. Saavik interrupts the conversation over the intercom. She informs Kirk that it sensors detect that another vessel has entered the area. The starship Reliant has just arrived!

Kirk arrives on the bridge. At first, Reliant's presence seems relatively benign if inexplicable. First course of action is to have Uhura try to initiate contact on the emergency communications channels. Reliant responds with static, while noting that Enterprise is still running with their shields down. After a few confusing but tense minutes, Saavik begins to remind the Admiral of Starfleet regulations governing how a starship should respond on the approach of any vessel, when communications cannot be established, but Spock cuts her off mid-sentence. Kirk suspects all is not right with the situation and orders the Enterprise to go to Yellow Alert. Weapons and defense systems are energized and put into stand-by mode.

The Enterprise is badly damaged in the Reliant's initial attack. With warp power lost and running only on emergency reserve battery power, Kirk is momentarily overwhelmed. He furiously attempts to regain control of the situation. Mr. Scott informs him that although the main energizer is out, he can have auxillary power online in a few minutes. Minimal phaser power is available, but it's not enough against the Reliant's shields.

While stalling for time, Kirk, Spock and Saavik access the charts of codes that control Relian'ts command console. They obtain Reliant's prefix code which enables them to hack Reliant's weapons and defense computers and transfer control of Reliant's shields to the Enterprise. Kirk fools Khan into believing that he is accessing and surrendering data and materials regarding Project Genesis. Meanwhile Mr. Sulu locks phasers onto the Reliant's engineering section. Spock then enters the code, (16309) at Enterprise's tactical station and transmits the data to the Reliant. Instantaneously, Reliant's shields begin to drop. Chaos quickly ensues on the Reliant's bridge. Khan realizes too late what is happening and searches in vain for the manual override to return control of the shields to the Reliant. As the shields completely drop Kirk orders Sulu to open fire.

In the Battle Of The Mutara Nebula, the Enterprise and Reliant are more evenly matched as a result of the effects of the nebula on the shields and sensors of both ships. Enterprise claims the first phaser shots although missing the Reliant by a narrow margin since phaser lock is inoperative. Reliant responds with a photon torpedo only to have it miss the Enterprise by an even greater distance. Both ships continue to navigate blindly, through the gas and dust in an attempt to mount a surprise, sneak attack against each other.

Reliant successfully fires on the Enterprise first in this final struggle but Kirk and Spock eventually out strategize Khan using 3 dimensional tactics which he is unfamiliar with due to his lack of experience commanding a starship in battle. The Enterprise circles back around to come up behind the Reliant, firing both photon torpedoes and phasers, destroying both of the Reliant's photon torpedo launchers and port warp drive nacelle. This cripples the Reliant and she begins to drift aimlessly without piloting. Khan's followers who served as his bridge crew are now, either seriously injured or dead. Khan himself is badly burned as well as mortally wounded. He has just enough time and strength to arm the Genesis torpedo and start the encoded 4 minute countdown to its detonation.

Commander Uhura is then given the order to alert the crew of the Reliant to surrender and prepare to be boarded. At this point, it seems as if the battle has been won but this premature victory is short lived however, as Khan, knowing that his ship has been incapacitated, arms the Genesis torpedo and begins a 4 minute countdown to detonation.

As a result of damage inflicted in the latest round of battle, the Enterprise has once again, lost warp drive. Moreover, Mr. Scott has been rendered unconscious by high levels of radiation in the engine room. Kirk is at a loss as to how to escape the path of the Genesis wave once the torpedo becomes critical and detonates. It has the capacity to reduce all surrounding matter within several AUs to sub-atomic particles, as part of its encoded matter re-organization matrix.

Kirk watches helplessly as the Reliant recedes ever so slowly into the distance. Impulse power is too slow to outrun the Genesis wave which travels at the speed of light. Without warp speed Kirk and his trainee crew aboard the Enterprise are doomed to suffer the same fate as the Khan and his surviving followers aboard the Reliant. Kirk tries in vain to reach Mr. Scott over the intercom but receives no response. Spock realizing that something is terribly wrong takes direct action to save the ship and crew. He quickly makes his way from the bridge to the engine room with hopes of assisting Mr. Scott in the task of restoring the ship's warp drive before its too late.
Retrieved from "https://aliens.fandom.com/wiki/User:Uss_reliant?oldid=109351"
Community content is available under CC-BY-SA unless otherwise noted.