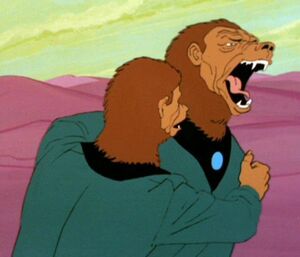 Star Trek
Ursinoids are a sapient species of bear-like humanoids native to an unknown planet. Their bodies are covered in brown fur, and the skin on their faces is of a lighter shade of brown. While they have a snout like that of a bear, their ears and forehead are more reminiscent of a great ape. Their homeworld is unknown, but at least two of them are known to work as miners on planet Motherlode.

In the non-canon novel Sword of Damocleds, an Ursinoid named Urgar serves Starfleet as an engineer aboard the USS Titan, in the late 24th century

Retrieved from "https://aliens.fandom.com/wiki/Ursinoid?oldid=180770"
Community content is available under CC-BY-SA unless otherwise noted.