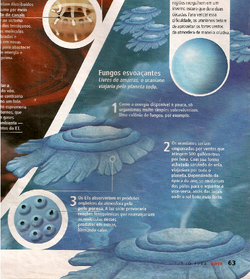 Superinteressante
Uranians are small, non-sapient, blue-colored fungoid organisms native to the atmosphere of planet Uranus. They are very simple creatures, and their flat bodies act as living sails, allowing them to be carried by the winds.

Uranians are phototrophs, using sunlight to produce energy. They are eternally migrating from equatorial regions to the poles and back, searching for the places where the sunlight is more intense. They also absorb organic nutrients from the environment through their porous skin.