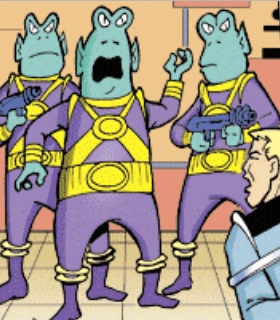 The Uranians are a spacefaring hostile species of vaguely batrachian humanoids who hail from the planet Uranus.

Despite their ruthless intentions to subjugate mankind, the unfortunate name of the Uranians' homeworld and their leader, O-Dor, have been an endless source of giggles to the crew of the R.U. Sirius.

Retrieved from "https://aliens.fandom.com/wiki/Uranian_(Brewster_Rockit)?oldid=163580"
Community content is available under CC-BY-SA unless otherwise noted.