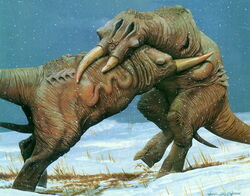 Expedition
Unths are tundra creatures with long, asymmetrical tusks, the right being longer than the left. They are named for the sound they make when they take a step. These animals are social creatures, travelling across the vast tundra in large herds. Although they only have one gender, Unths still fight each other for the right to mate. After the duel, both creatures release pheromones that initiate the reproductive process. It is assumed they communicate via echolocation like most creatures on Darwin IV.

Although never confirmed, in Alien Planet it is speculated that these creatures might have two genders.