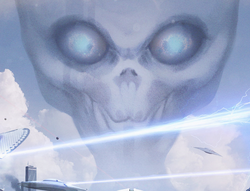 In 1992 the government declared the American city of Green Hills a closed territory because of an alleged accident at a local chemical plant. Since then, the entire Green Hills territory has been completely isolated from the outside world and only recently has the public learned the terrible truth. Aliens exist, they have long since infiltrated the governments of different countries and are able to easily manipulate the minds of citizens. Green Hills, with its unique geographical landscape, has attracted the attention of extraterrestrials as an arena for alien fighting machines, and the human pilots of these mysterious objects are zombified by alien invaders. Pilots picked from part of the population of Green Hills are still being kept somewhere in the city in a hypnotic state of re-animation.

On April 1, 2019 city of Green Hills has become the scene of an intergalactic cyber-sports game in which aliens use humans as pilots of alien war machines between alien teams Red and Blue.

Specifications of spacecraft in alien language.
Add a photo to this gallery
Retrieved from "https://aliens.fandom.com/wiki/Unnamed_species_(War_Thunder)?oldid=181474"
Community content is available under CC-BY-SA unless otherwise noted.