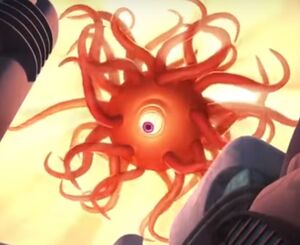 Not much is known about this unnamed one-eyed alien as it briefly appeared to attack Metro City. Its origins and motivations are completely unknown.

The alien's body is spherical in shape with numerous wriggling tentacles and a single cyclopic eye which it uses to shoot an energy beam.

Retrieved from "https://aliens.fandom.com/wiki/Unnamed_orange-skin_species_(Astro_Boy)?oldid=185213"
Community content is available under CC-BY-SA unless otherwise noted.