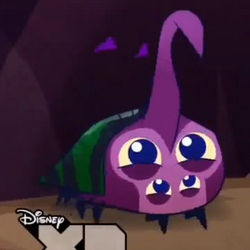 This species is blue insects with orange and yellow armor and wings. They have 4 eyes. They sapience level is unknown. While they looks like non-sapient bugs they created groups and known cardiopulmonary resuscitation

Retrieved from "https://aliens.fandom.com/wiki/Unnamed_insect_species_(Penn_Zero:_Part-Time_Hero)?oldid=181603"
Community content is available under CC-BY-SA unless otherwise noted.