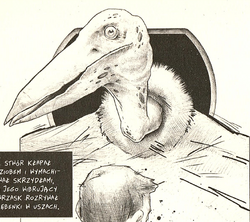 This species are birds in height of Humans looking simlar to marabou stork. They haven't got fingers and to many works they using slaves, including Humans. They breathe oxygen.

Until 2313 this species were unknown for Intersystem Union. They make contact with theorist organisation called Destroyers that where selling Human slaves to them on ship Persefona. Group that were using old IU spaceship was arrested by Orbital Service, the IU task force.

Retrieved from "https://aliens.fandom.com/wiki/Unnamed_avian_species_(Zagubieni)?oldid=174403"
Community content is available under CC-BY-SA unless otherwise noted.