Start a Wiki
Eater of worlds, Pennywise, IT 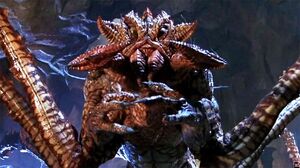 Shape Shifter, gets stronger with fear and psychological illusions.

It, Sleepwalkers and The dark tower.

Stephen King
This killer creature known as the eater of worlds is more know to appear in (IT 1990, 2017 and 2019), but not only appears in this movies is also connected to (Dreamcatcher 2003) and (The dark tower 2017). Pennywise is it's more comun form. He lives beneath the surface, underground, in town Derry. Each 27 years he appears 18 months ready to hunt his victims, children.
Retrieved from "https://aliens.fandom.com/wiki/Unnamed_Arachnoid_(Stephen_King)?oldid=160943"
Community content is available under CC-BY-SA unless otherwise noted.