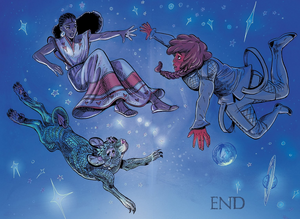 Universal Spirit Travelers are a class of rare individuals that are able to extend their minds to other worlds.

New Universal Spirit Travelers, or Manifests, emerge spontaneously. Usually when a being manifests their abilities, they go through stages of advancement. There are between four and six stages depending on the species.

The first stage of a newborn Universal Spirit Traveler. Manifests experience vivid dreams as other beings. These dreams are actually the Manifests possessing other sentient beings whilst they are sleeping. The subjects that experience these possessions are in fact potential Universal Spirit Travelers whose abilities will later emerge in time. The Dream Stage is most disorienting as the user has no control over who he or she may possess.

A stage in which another astral projector inhabits the user's body and their soul ends up hovering nearby. Or an experience of a memory download, which is quite stressful.

Later stages haven't been stated explicitly, but it's suggested that the Manifests will gain the ability to not only project their astral forms across space, but actually physically interact with a distant world.

Retrieved from "https://aliens.fandom.com/wiki/Universal_Spirit_Traveler?oldid=160676"
Community content is available under CC-BY-SA unless otherwise noted.