"Energy, Unity, you would describe thus"
―A Unity describing intself to SGC 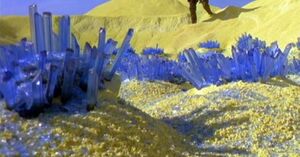 The Unity were a crystalline life form encountered by the SGC in the first season. The species was all but destroyed by the Goa'uld and only a small handful survived the destruction.

Unlike most races in the universe the Unity are a crystalline life-form instead of being carbon-based. They are capable of using the electrical energy stored in their body to mimic faces in order to communicate with other lifeforms, and to release the energy as a defensive weapon. Some Unity are capable of manipulating the energy to such a degree that they can become a perfect copy of another life-form.

Unfortunately, the unique nature of the energy in their bodies means they can only live on their own world or one was little background energy. Prolonged time on a planet like Earth will lead to death for a Unity.

In their natural form they look like blue Crystals but they can alter the crystal surface into a face to communicate with other lifeforms.

At an undetermined period before the formation of the SGC the Unity homeworld was visited by the Goa'uld. Unafraid and curious the Unity attempted to greet the new arrivals on their world. Unfortunaly, the Unity lacked an understanding of how their energy would affect organic beings and they accidently killed one of the Goa'uld who got to close.

Now seen has a threat the Goa'uld rounded up all the crystals they could find into a single location and attacked them with a barrage of staff weapon's fire.

Satisfied with their massacre and seeing nothing of value on the planet the Goa'uld did not return.

However, unkown to the parasites the massacre was not a total success.

In 1997 the Unity world was visited by SG1 who came upon the mass grave unity; Daniel initially believing it to be a ceremonial sight given all the crystal. The surviving Unity did not reveal themselves while SG1 investigated the area; fearful of creatures who resembled their would be murders.

Eventual the team returned to earth with several crystal for study and an unkown stowaway; an undamaged Unity which had taken the form of O-neil. During their investigation of the sight O-Neil out of sight of his team had encountered an intact crystal. Reaching out in curiosity the crystal had blasted him in panic and assumed his form in order to find a way to heal his "Injury". The creature had feared its attack on O-Neil would alert the Goa'uld of the presence of surviving Unity so it sought to rectify the mistake before discovery.

However, it misunderstood the pain the human felt was an emotional one at the death of his son Charlie. The creature them went off in search of the boy.

Meanwhile, the rest of the team studied the crystals they had brought back and during the investigation one of the more intact crystal made contact with the humans. Forming a copy of Sam's face it pleaded for help.

Retrieved from "https://aliens.fandom.com/wiki/Unity?oldid=163739"
Community content is available under CC-BY-SA unless otherwise noted.