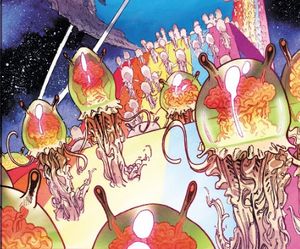 Marvel
This species was native to a planet known as Sylus that was an uninhabitable and minuscule mesoplanet and formerly home to a race of long dead sorcerers.

Jellyfish like creatures with translucent heads, revealing a brain.

The threat of a star plague had arose with the coming of the Everwinter. To combat this threat Galactus has sought five special planets with rare energies that would allow him enough strength to combat the existential menace. Taking Thor as his new herald, the god helped evacuate the inhabitants using the Bifrost bridge, and allow Galactus to feed on the energies of the planet due to the burial ground being rich in decomposing enchantments and dark power.

Retrieved from "https://aliens.fandom.com/wiki/Unidentified_Sylus_Species?oldid=172307"
Community content is available under CC-BY-SA unless otherwise noted.