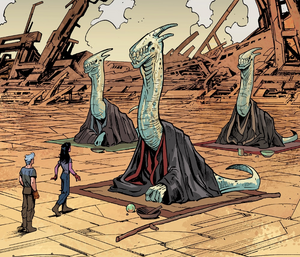 This species is indigenous to the planet Primus Polaris.

They are large fossilized saurian-like creatures. The outer body appears to be like a shell, they possess a long neck similar to a brontosaurus. They seem to be blind creatures, but they possess fleshy pink stalk eyes that are hidden within a second jaw.

This species were native to Primus Polaris until humans from the Colonial Congress took their world under the reign of Heliocor.

The species still exists, living on the outskirts of the Slab. Aden and Satari stumbled upon their carvings beneath the Slab. The discovery prompted them to learn of their whereabouts.

They appear to possess a society of ascetics, calmly waiting out in the open, mediating.

Retrieved from "https://aliens.fandom.com/wiki/Unidentified_Primus_Polaris_Species?oldid=173367"
Community content is available under CC-BY-SA unless otherwise noted.