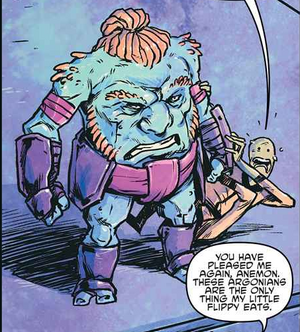 This species resembles mythological creatures known as Anthropophagi, beings without heads, but instead have their faces on the torso.

In order to protect his world, from Kraang's tyranny the alien Anemon as a member of his race, agreed to become the Utrom warlord's servant. After successfully conquering the Argonian people, Kraang demanded Anemon to further prove his loyalty by providing him the coordinates to the Hidden Temples of Akebono.

The Temples contained the food stores of Anemon's people, and without them his race would starve. However Anemon consented and gave him the false coordinates. Kraang saw through the deception and suspected betrayal and preemptively wiped out the people of Akebono in preparation.

Anemon the only survivor of his world, escaped Kraang's genocide, but was blinded during the escape. He managed to find refuge on a far way world in Dimension X, where he befriended the alien Eymo who acted as his eyes.

Anemon would later be called by the Dimensional Council to testify against Kraang in the memory of his people.

Their culture seemed similar to Japan, and interestingly they were practioners of sumo. According to Kraang their food stores on Akebono could have fed his armies across Dimension X.

Retrieved from "https://aliens.fandom.com/wiki/Unidentified_Akebono_Species?oldid=173123"
Community content is available under CC-BY-SA unless otherwise noted.