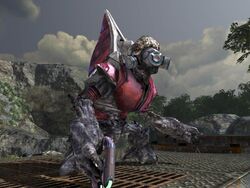 Halo
The Unggoy or Grunts are a small arthropod species that resemble therapsids in the ranks of the Covenant and later some of them joined the Covenant Separatists.

The Unggoy believed in the return in the Great Szöttyögő, which will liberate them from the great regression, Nátha. He shall came from the planet Zsepi, and with the help of Házipálesz and Fokhagyma, and destroy the evil god and godess, Takony and Hurut with a single blow.

The basic infantry unit of the Covenant, Grunts are the lowest beings in the Covenant hierarchy. They present little threat individually, but are dangerous in large numbers. Grunts, known as Unggoy (which means "monkey" in Tagalog) in the Covenant language, are the workhorses of the Covenant. They serve as common laborers across Covenant controlled space. Short, stocky, and relatively slow, they will often panic when faced with superior forces. However, if they are being led by an Elite, they will stand and fight. It should be noted, that Heretic Grunts do not show fear and continually attack the player, even if the lead Elite dies. Despite their obvious cowardice, they are extremely large in numbers, long-lived and breed rapidly, and - when cornered - can attack with suicidal desperation. Grunts are usually armed with single handed weapons, like plasma pistols, needlers, and plasma grenades (which they are incredibly good at aiming), although in Halo 2 the Arbiter can give his Grunt allies a plasma rifle and Brute plasma rifle, even though they never typically use one.

Unggoy stand 4–5 feet tall and weigh about 150 pounds. They are warm blooded due to the long cool season of their homeworld. They have leathery, blue-gray skin, covered in small scales. They have chubby, almost perfectly round heads, while the rest of their skin is irregular and lumpy. They have short, stubby spines jutting out of their elbows.

Unggoy, while being arthropod in origin, have some mammalian features, primarily simian and elephantine characteristics, namely being able to run on both two or four legs, and small, black, beadlike eyes. Also, they have the elephantine appearance of hoof-like feet, with blunt toenails and baggy, loose skin. However, they're actually arthropods. They have blue phosphorescent blood that is thought to glow because of the high concentration of methane in their system.

Their homeworld is a cold ice planet, however across the planet are natural occurring pillars of fire. Around these pillars are warm swampy regions and this is the place the unggoy live.

Because they breathe methane they are forced to rely on a large, bulky SCUBA-like "rebreather" system in order to survive in oxygen atmosphere areas - which, unfortunately for the Grunts, are almost everywhere in Covenant society, since no other Covenant race breathes methane. Strangely, on the first arbiter level, the planet you go on is covered in Methane, yet the Grunts star with their gas masks on, although this could be that oxygen is inside, and the methane is only outside of the structure. The Grunts are approximately 5' tall, which does not give them any confidence when facing humans, though they lose most of their fear when using a plasma turret or a vehicle. In spite of their low rank in the caste, some Grunts have been trained with the bulky fuel rod guns and have been seen wearing black reinforced armor, implying that they are Special Ops. This does not hold with classic Covenant operation, but it seems to be the case. Because of their aforementioned tendency towards panic, disarray, and dying, the Grunts are usually herded as cannon fodder and directed by one or more of the higher caste, normally an Elite. If the higher-ranking Covenant member leading the group is killed, the Grunts will usually scatter. Grunts will also retreat when the player wields an energy sword in the grunt's view.

Most Grunts carry single plasma pistols and sometimes grenades. They never seem to "overcharge" the pistol and take out shields(except in Halo:Reach), but merely shoot it in single fire mode. Most of them carry plasma grenades, and will be used as suicide bombers by running towards the player while carrying an activated plasma grenade in each hand.

Somewhere in the history of the Covenant, the Grunt Rebellion took place; this marked the start of the 23rd Age of Doubt. An Arbiter was created to deal with the threat, as the Grunts put up a surprisingly good fight.

Grunt culture has largely been erased by their incorporation into the Covenant, and they obey most of the other Covenant races out of fear because they have no political power in the Covenant. However within the Grunt community there is a strong hatred of most other species, particularly Jackals, (as evidenced at one point in Halo 2 during the Sacred Icon level) and it has been stated that the Grunts have hopes for a particularly heroic, strong, tall Grunt to one day become the savior of their kind and set them on the path to freedom by another Rebellion and the return to their homeworld. They are still used by the Covenant as cannon fodder as evidenced in almost every level in which the player fights against the Covenant. Some of them have joined the Separatists and others remained with the Loyalists. Both probably did this out of fear for the elites and the brutes.

In Halo: The Fall of Reach it is mentioned that a reason why Grunts fight suicidally is that when they die they will go to the 'methane filled paradise', especially if they die following commands of a Covenant Elite. Some Grunts, however, are noted to not act so aggressively and suicidally; a Grunt named Yayap, for example, avoided the needless deaths of his entire squad by having them evacuate an unconscious Elite from the Pillar of Autumn.