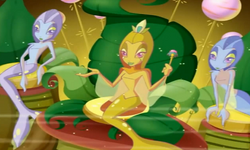 They are a seemingly female only species that look like miniature mermaids with transparent flaps of skin under their arms which allow them to fly, but have no real wings. They are usually purplish or bluish in color, except Lusiz, who is pale green, and Algae, the Queen of the Undines, who has golden-dullish light lime green skin. They appear to be of varies colors, the most prominent being a very light shade of blue. Their whole body is like a mermaid's however, they are much smaller in size and their hands, aside from their thumbs are fused together and have transparent flaps of skin under their arms.

The undines live under a monarchy, lead by Queen Algae.

Algae, Queen of the Undines

Lusiz
Add a photo to this gallery
Retrieved from "https://aliens.fandom.com/wiki/Undine?oldid=187293"
Community content is available under CC-BY-SA unless otherwise noted.