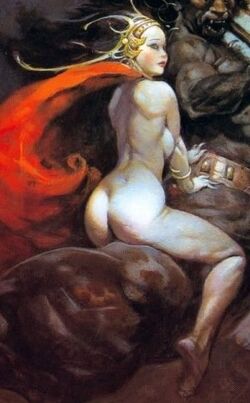 Edgar Rice Burroughs
One of the two humanoid races of Earth's moon, the U-gas are distinguishable from Earth Humans by their marble white skin and their glossy black hair. Very few if any remain within Va-nah.

When their race split from the Kalkars they hid in the city of Laythe (although the existence of other cities is possible). Laythe would be attacked by the Kalkars lead by Orthis and likely all residents being killed. Not much is known about their religion, but they believe in some form of reincarnation.

U-gas breed Va-gas for meat and are in turn preyed by the Va-gas as well.

Retrieved from "https://aliens.fandom.com/wiki/U-ga?oldid=199878"
Community content is available under CC-BY-SA unless otherwise noted.