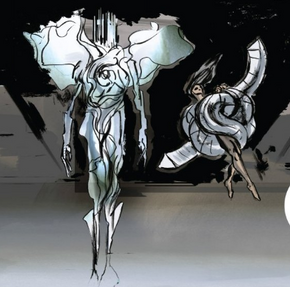 The Fourth Planet
The Tythyk are a sapient alien species.

The Tythyk giant ethereal-like beings. According to James Borsek they use other species as incubators for their larva, eating the host from the inside out over a period of two months.

Decades ago the Tythyk invaded Earth and its colonies. The alien converted humans in breeders, creating factories that breed castes of warriors and engineers to serve them aboard their slave ships.

James Borsek, a human that lived during the beginning of the Tythyk invasion, managed to lead a rebellion taking over a war cruiser and 43 other vessels. The humans took advantage of the fact that the Tythyk armada was away from the sector and planned to attack a Tythtk colony to free more of their brothers and sisters.

The Tythyk rule a stellar empire called the Tythyk Empire.

Retrieved from "https://aliens.fandom.com/wiki/Tythyk?oldid=182009"
Community content is available under CC-BY-SA unless otherwise noted.