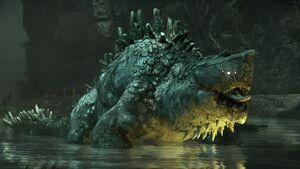 Evolve universe
Tyrants are one of the large carnivores native to Shear, one of the top predators of it's territory. Tyrants are aquatic hunters, with a behavior resembling that of an alligator. It lies and wait in the murky waters for smaller creatures to venture close, to which it attacks with massive jaws, and drowns underwater before consuming it. It has a large selection of prey items to choose from, which include humans. However, towards larger creatures close to it's own size, or another large predator, it won't attack unless provoked.
Retrieved from "https://aliens.fandom.com/wiki/Tyrant?oldid=176107"
Community content is available under CC-BY-SA unless otherwise noted.