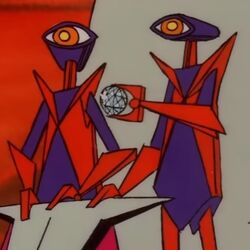 Taller than the average Human

Tyranos are a mysterious race of sapient alien creatures with metallic bodies and electricity-based metabolism.

Tyranos are metallic bipeds which stand taller than the average Human and considerably taller than Throgs. They have clamp-like hands, and a single eye occupying their entire faces.

Tyrano metabolism is based on electricity. They always travel in pairs, in which one individual is positively-charged and the other is negatively-charged. Each depends on the current between them to operate, and will be deactivated if isolated from their pair. They're also collectively dependent on a large power cylinder. Damaging the cylinder will instantly deactivate all Tyranos in the area, although if the energy is restored to it, they will return to activity with their minds and memories intact.

Tyranos are a hostile species which prefers to attack others rather than engage in diplomacy. They claim that they don't believe in peace.

However, this mentality derives from an incident in their history, in which their world was visited by another race which claimed to come in peace, but which later exterminated most of the Tyranos, forcing the remaining ones to leave their world and invade the Throg's planet in search of a new home. Having learned from that previous incident to distrust other races, the Tyranos came to regard the Throgs with hostility.

Retrieved from "https://aliens.fandom.com/wiki/Tyrano?oldid=185122"
Community content is available under CC-BY-SA unless otherwise noted.