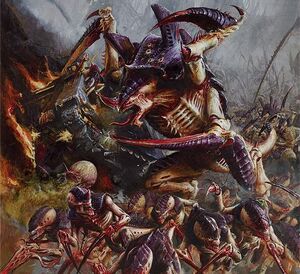 Varied, typically any and all life forms in their path

The Tyranids are a nomadic extra-galactic race comprising many genetically engineered forms created from harvested bio-mass. They are known as the "Great Devourer" and pose a severe threat not only to the Imperium of Man, but the entire galactic community. They seek to consume all in their path, draining all planets of any possible resource with horrific speed and power. They are comparable in terms of their voracity, and in some cases, appearance, to the Xenomorphs, as well as the Zerg (the latter of which they inspired).

The Tyranids are all of a basic genetic stock, characterized by six limbs, both an endoskeleton and an exoskeleton, external skeletal features distinct from an internal skull, carapace plates on their head and a series of spiracles on their heads and at the base of their tails. The assimilated DNA structures and resources of the planets invaded warp Tyranids into a multitude of genera, all of which have an extremely rapid rate of evolution. Tyranid matter is constantly reabsorbed into biomass reclamation pools, called Digestion Pools, and "tyraniforming" devices, called Spore Chimneys, to create new varieties mixing with new assimilated DNA structures of the races of the invaded planet.

The digestion and absorption of a planet and its lifeforms by the Tyranids happens over three stages:

The Hive Mind is the gestalt metaphysical entity thought to emanate from and exert cohesive control over all Tyranid individuals through psychic manipulation. In terms of the terrestrial Tyranids' encounters with other species, generally in conflict, the Hive Mind is explained as filling the roles of social hierarchy, linguistic communication and military command and control as used by other races.

The Hive Mind is delivered through "Synapse" creatures such as the Tyranid Warrior, and makes all Tyranids in range all but immune to psychological assaults, resistant to even the deadliest blows, and under control. Tyranids out of Synapse range will revert to their natural instincts and/or move to within range of a synapse creature. The presence of the Hive Mind is what separates Tyranids as an invading force able to devour worlds from stray Tyranids that act like animals and inhabit Death Worlds, such as the "Catachan Devil". Killing the synapse creatures causes severe problems for a Tyranid army.

The Hive Mind is also shown as being responsible for widespread (light-year scale) disruption of Imperial communications and superluminal travel via a mechanism known as the Shadow in the Warp. This introduces complications to the affairs of Imperial protagonists that involve Tyranids in some way, as the Human find themselves isolated from outside aid via warp travel and doomed to face the Tyranid menace alone.

This is not yet a complete list of all known Tyranid strains. 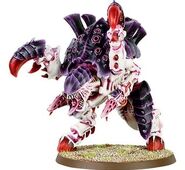 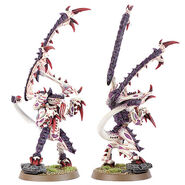 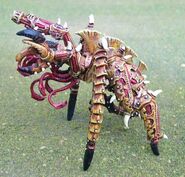 The Swarmlord
Add a photo to this gallery

Retrieved from "https://aliens.fandom.com/wiki/Tyranid?oldid=185614"
Community content is available under CC-BY-SA unless otherwise noted.