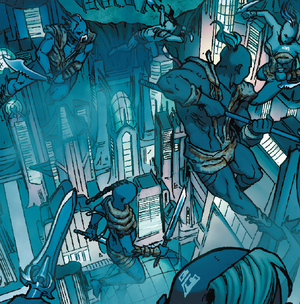 The Typhos are a race of humanoids that once coexisted in the oceans of Earth with the Blue.

They Typhos are humanoids, with pale skin. They wield similar hydrokinetic abilities like the Elite Blue. However, they seem to lack the ability to change their density and turn into water. However, as they once dwelt in the deepest trenches of the ocean, immune to the crushing effect that would shatter normal Humans, they are afforded greater resistance to projectile weapons. They are susceptible to peditoxin poisoning.

The Typhos are represented as an arrogant race with an ideology that they were living gods, superior to all other races, both Humans and Blue alike. Their so-called godhood status, prompted them to make war on the Blue, as they could not stand their existence of a similar gifted race. To combat their mortal enemies they developed technology that could harm Elite Blue even when they transform into water. The Typhos grafted these weapons unto their arms so that they can never be disarmed in combat.

According to legend, the Typhos were slighted by the Blue's power and status. They attacked Muria, the Blue's capital, sparking a war between the races of the sea. Though the Typhos possessed superior weaponry to combat the Blue, the Typhos fell to tribal infighting reducing their numbers. The Blue eventually overwhelmed them, ending the decades long conflict. The surviving Typhos were then imprisoned in stasis deep beneath the seas.

It's later revealed by Cannon Hawke, a once noble Elite Blue and emissary between the Humans and Blue, that the Typhos were created by the Blue as a countermeasure against emerging humanity.

Retrieved from "https://aliens.fandom.com/wiki/Typhos?oldid=169658"
Community content is available under CC-BY-SA unless otherwise noted.