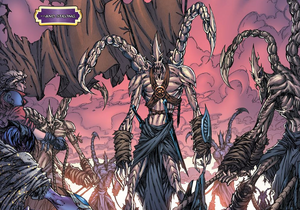 The Tykthas are an insect race from a towering island called Black Rock.

The Tykthas are a large pale skinned insect-humanoid race. They possess bony chitinous carapace, standing over seven feet tall (~ 2.1 meters). Their species received their name due to the noise which they make when conversing with Humans. Attached to their back are two long flexible tendrils ending in pincers. They are extremely strong, capable of pulling a full grown Human with little effort.

Their children, however, were noted to be very tiny, about the size of a doll, though lacking the tendril of the adults and extremely thin.

They are insectoid, yet individualistic. They're a carnivorous species, however, they are civilized enough to be reasoned with. However, they don't like to be considered fools and tricked, resulting in that those that steal from them risk being captured and eaten. To mine for the ziar crystal within Black Rock, they utilize their children to extract the rare mineral from the cracks.

The Tykthas traded with the pirate Boro, giving him ziar, a black energy crystal, in exchange for live meat.

Retrieved from "https://aliens.fandom.com/wiki/Tykthas?oldid=161202"
Community content is available under CC-BY-SA unless otherwise noted.