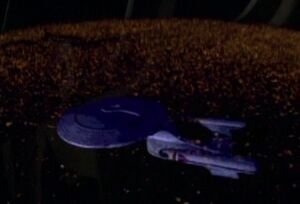 Star Trek
Two-dimensional lifeforms are living creatures which only exist in a two dimensional plane. According to Data, they possess length and width, but no height. They appear to live in large groups and are capable of telepathy and sharing emotions, in fact they do it to such an extent that other telepathic species, such as Betazoids, may suffer the temporary loss of their empathic abilities when standing close to a swarm of Two-dimensional Lifeforms. Their bodies are also able to exert an attraction similar to gravity in nature, which can interfere with a starship's engines.

In the year of 2367, the USS Enterprise-D was caught stranded in a flock of these lifeforms, which their sensors had difficulty in detecting due to their two-dimensional nature. This proved to be a really dangerous situation when it was discovered that the creatures were heading towards a cosmic string (a one-dimensional structure crudely analogous to a black hole) and dragging the Enterprise along with them. The Enterprise was able to free itself by simulating the vibrations of the cosmic string in another direction, causing the lifeforms to temporarily change course. At first, it was believed that the Two-Dimensional Lifeforms were non-sapient, and were heading for the danger in the same fashion that a moth heads for a flame. However, with Betazoid counselor Deanna Troi recovering her telepathy, it was discovered that the creatures are actually unharmed by the cosmic string, and even make their homes in it.

Retrieved from "https://aliens.fandom.com/wiki/Two-dimensional_Lifeform_(Star_Trek)?oldid=180769"
Community content is available under CC-BY-SA unless otherwise noted.