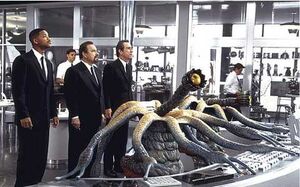 Men in Black
Twins are a gastropod-like race that originates from the planet Centauri B.

Twins are grey gastropods of radial symmetry, with eight blue/grey arms equally spaced around the body, each terminating on two digits. From their central area protrudes a single black eyestalk with a large yellow eye. Their central area is yellow.

They were rendered with only five arms in the animated series, while the movie clearly shows them with eight. They also have light-coloured spots, a brown belly and a yellow back.

Retrieved from "https://aliens.fandom.com/wiki/Twin_(Men_In_Black)?oldid=182727"
Community content is available under CC-BY-SA unless otherwise noted.