"You don’t know the true worth of these Tweenies. They combine the best of Earth and Mars. They possess the cold, analytical reasoning powers of the Martians together with the emotional drive and boundless energy of the Earthman. As far as intellect is concerned, they are your superior and mine, every one of them. I ask only equality."
―Jefferson Scanlon, arguing for equal rights for Tweenies. 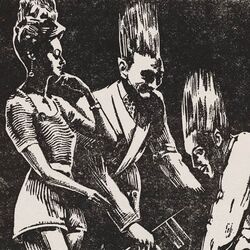 Seem to require the same environmental conditions as Humans

Isaac Asimov
Tweenies is a name given to Human-Martian hybrids, which tend to suffer social marginalization on Earth and presumably on Mars. Despite being hybrids, they are still fertile and often marry among themselves, eventually making up their own race and successfully colonizing Venus.

Tweenies are humanoid beings, not too distinct from a Human. They're notable for their advanced intellect and for their white wire-like hair which grows upwards like porcupine quills and remains that way even when wet.

A homeless Tweenie boy was adopted by a Human inventor named Jefferson Scanlon. The Tweenie, named Max, helped his foster father complete his newest invention, which turned out to be an atomic power generator that could allow for more efficient forms of interplanetary travel. Later on, Scanlon adopted three orphaned Tweenie girls as well, and Max ended up marrying the oldest of them: 18-year-old Madeline.

Having grown rich as the result of his inventions, Scanlon started dedicating himself to a new project called Tweenietown, which eventually grew into a fully-functional settlement for Tweenies, with a population of about 1100. Unfortunately, his campaign for the Tweenies to be viewed as equals was never successful. Seeing that on Earth they would always be regarded as freaks, Max led his race in a new and ambitious journey to successfully colonize Venus.