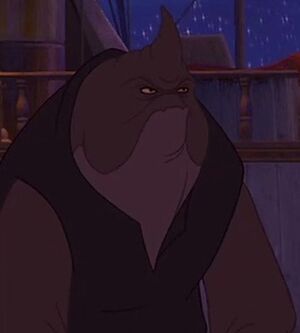 Tuskrus are a sapient species and one of the members of a vast interstellar Empire.

They are portly mollusk-like creatures which also combine traits of fish and manatees. They have a single horn on their heads, bulldog-like jowls, clawed hands and tentacle-like legs.

Mertock was a member of John Silver's gang of interstellar pirates recruited to serve aboard the spaceship RLS Legacy in her expedition to find the legendary treasure of Captain Flint.

Retrieved from "https://aliens.fandom.com/wiki/Tuskrus?oldid=187886"
Community content is available under CC-BY-SA unless otherwise noted.