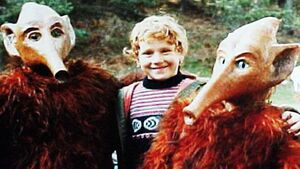 Two members of Trumpy's species compared with a Human child.

Members of this species are child-sized mammalianoid bipeds with bodies covered in dense brown fur, although their heads are entirely hairless. Their faces are dominated by a long tubular mouth similar to that of an anteater or aardvark. They have a conical skull crest, large pointed ears and Human-like eyes. Their hands have five digits, including an opposable thumb.

Members of this species are born from large pod-like eggs, and have an accelerated growth rate, reaching adult size in less than a day. Adults display parental care by attacking anyone they perceive as a threat to the eggs or infants. In spite of their size, they have a lot of physical strength and can kill a Human being easily.

They can survive in Earth's environment and safely consume substances such as milk and peanuts; which they suck into their tubular mouths like a vacuum cleaner.

The most notable trait of this species is their extraordinary abilities, which include moving objects with telekinesis, standing upside-down on ceilings, interfering with the working of electric devices, and projecting images. Their eyes glow when they display these abilities, and they can also make other objects glow. For reasons that are not entirely understood, people who have been killed by this species were found after death with a pattern of glowing dots on their foreheads.

Additionally, the aliens' ability to apparently comprehend Human speech without learning it might suggest some form of telepathy, although it doesn't seem to be advanced enough to allow them to communicate coherently with other life forms.

When a member of this species is killed, their bodies seemingly crumble and turn into soil immediately.

Very little is known about this species, but they seem to travel in asteroid-like ships containing several eggs, as well as at least one adult tasked with taking care of them. It's not known whether these ships are meant to be sent to other worlds to colonize them, or whether the one that crash-landed on Earth did so by accident.

Retrieved from "https://aliens.fandom.com/wiki/Trumpy%27s_species?oldid=183686"
Community content is available under CC-BY-SA unless otherwise noted.