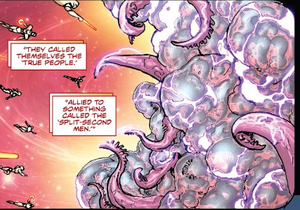 Stan Lee Universe
The True People are an alien species.

The Hybrid classify the True People as camouflage predators. In their true state they resemble gelatinous pink liquid. They are shapeshifters, taking the form of organisms in order to trap and absorb them.

The True People are currently at war the the Hybrid civilization. They were allied with the Split Second Men from Earth. Eighty Hybrid cohorts fought the two forces at the Baynard's Star, and uncovered evidence that the True People were impersonating humans on Earth. The Hybrid soldiers brought this to the attention of Soldier One, Karhul, their commanding officer. They recommended that they report this to Hybrid Command.

However the Hybrid commander turned out to be a traitor and slaughtered them. One of the survivors, Gorshen, managed to escape to Earth but was chased by Karhul.

Retrieved from "https://aliens.fandom.com/wiki/True_Person?oldid=187632"
Community content is available under CC-BY-SA unless otherwise noted.