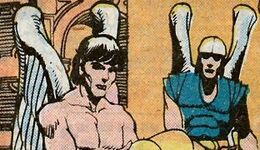 The Orovars of the city of Karanthor, also known as the True-Born.

The Orovar are a white skinned and race that appear mostly human. There seems to be many hair colors amongst the race, their ears are pointed and their eyes seem mostly blue. The men of the race have two wings that enable flight, but all the females are wingless! Some men are born without wings, they seem to be considered inferior. Members of this race can get quite large and are incredibly strong (according to them, ten red men equaling one of them).

Their beliefs state that the great canyon that they live in is all of barsoom, that the walls of the canyon hold up the sky and what lies beyond them is either non-existence, or hell! They believe that the red men that are stranded in their valley are caste down from the skies to serve their race only as slaves

The original Karanthor was a great city, it was destroyed in a cataclysm during the changes that slowly destroyed the world. The survivors colonized the great rift valley that opened near their now dead city. once in the valley they were unable to leave, they planted crops and farmed the land. For unknown reasons the majority of the men began to develop wings for, equally unknown is why the females remain wingless!

Retrieved from "https://aliens.fandom.com/wiki/True-Born?oldid=166538"
Community content is available under CC-BY-SA unless otherwise noted.