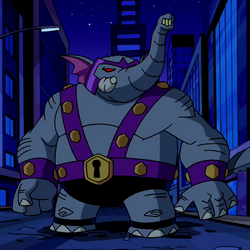 Ben 10
Tombipulor's Species is an unnamed race of elephant-like aliens.

This species resembles humanoid elephants with bat-like ears and mouths that are either below or at the end of their trunks.

Although they traditionally have grey skin, this species can come in different colors. For example, members from Dimension 23 have white skin.

This species possess enhanced strength, allowing them to fight on par with Tetramands, Talpaedans, and Vaxasaurians.

This species possess enhanced durability, enough to withstand being hit by a lamp post.

This species has a level of enhanced intelligence, enough to build an army of mouse-like robots.

This species can grow to massive sizes when they eat peanuts. This in turn increases their natural strength, being able to fight against a To'kustar.

This species can fire peanuts out of their trunks like a machine gun. They can also use their trunks as a vacuum to suck up other beings such as Galvan and Polymorphs.

Similar to myths of elephants, this species is afraid of mice.

This species appears to be vulnerable to heat, such as that generated by a Prypiatosian-B.

This species is sensitive to high-pitched sounds, such as those generated by Sonorosians. This weakness increases while at full size due to their ears being very large in that state. 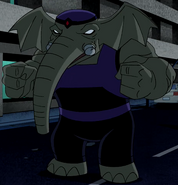 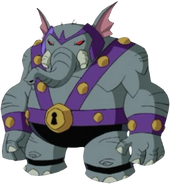 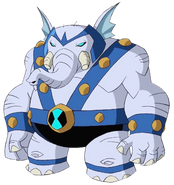 Ben 23 as Trunk Man
Add a photo to this gallery

Retrieved from "https://aliens.fandom.com/wiki/Trombipulor%27s_Species?oldid=189422"
Community content is available under CC-BY-SA unless otherwise noted.