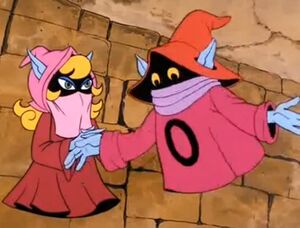 The Trollans are a sapient species from the planet Trolla, located in another dimension which is reachable from Eternia.

They are short humanoid creatures with bluish skin, long arms, small legs and pointed ears. Their hands have four digits, including an opposable thumb. They are known for their mastery of magic (to varied degrees of ability depending on the individual) and move around exclusively by floating. Only the females are seen to have hair; although older males sometimes grow bushy white eyebrows and long beards.

Trollans get weaker when the oxygen content of the atmosphere becomes rarefied; indicating that they breathe oxygen, just like Humans.

Members of this species often conceal themselves in heavy clothing, and consider revealing their faces a very intimate act. The mischievous Trollan pranksters from the region of Karadania are an exception to this, and wear more revealing outfits. Trollan buildings and furniture are typically made to levitate like them.

Besides the Trollan people, the planet Trolla is also home to several non-sapient lifeforms, including a large three-eyed reptilianoid which is domesticated by the Trollans; an arboreal cephalopod-like predator; and the massive worm-like Scargs, considered the most dangerous creatures on Trolla.

A Trollan from Karadania
Add a photo to this gallery
Retrieved from "https://aliens.fandom.com/wiki/Trollan?oldid=189162"
Community content is available under CC-BY-SA unless otherwise noted.