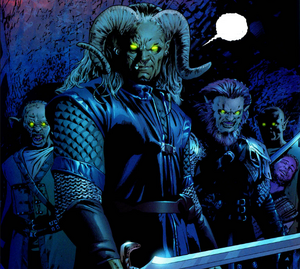 The Trolls are a species native to the planet Quin.

The trolls are a yellow skinned humanoid race with green glowing eyes. They are a long lived species, living to a standard of over three centuries. However they are slow to replenish their numbers compared to humans. Some rare individuals sport cranial horns. They are distantly related to the Iskani.

The trolls were a proud and strong people that dwelt in the deep woods of Grinbor. The trolls had no interest in the lands beyond their own and always looked after their own. They lived in peace, until the humans from Middlelyn came. The humans felled the great forests of Grinbor for lumber and firewood. Eventually human settlers came, breaking the land to create farms, hunting game with abandon, and damning rivers and creeks.

The humans stripped Grinbor of its resources, and the trolls seeing the destruction of their home, retaliated in the only way they knew...war. The humans responded in kind, and with their advantage in numbers, overwhelmed the trolls. Extinction was nearing the trolls from their battles with humans forcing them to withdraw deeper into their forests. Salvation came in the form of a human named, Mordath who was healed by a troll witch. Mordath who had lost his family to men, aligned himself with the trols of Grinbor, eventually uniting the troll clans and becoming their leader. They fought a war of revenge over the Five Lands.

However when Mordath and his allies were so close to attaining total domination of Quin, a stranger named Ayden appeared and united the remaining free people and launched a war of retaliation. Mordath was driven back to his last stronghold which fell to the united armies. He was approached personally by Ayden who slew him with a arrow through his heart.

The loss of Mordath was a crushing blow to the trolls. The became leaderless and were hunted by humans, bounties placed on their heads. The trolls managed to salvage Mordath's corpse and hid it. When Mordath was given new life by Solusandra, gifting great power, Mordath quickly killed the troll chieftains that dared defy him. Uniting them once more he resumed his plan for conquest.

The trolls were originally a hunter gather race, that lived off the land. They possess a strong warrior tradition and are divided into many clans.

Trolls are a spiritual people, the old ways teach them to honor their kill and never to kill without reason. When an old troll nears death, it’s preferred to meet their end by the blade. Thus a family member is required to euthanize the old troll to fulfilling their request and end their suffering.

Retrieved from "https://aliens.fandom.com/wiki/Troll_(Sojourn)?oldid=183497"
Community content is available under CC-BY-SA unless otherwise noted.