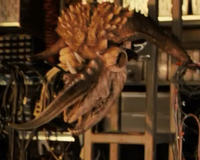 The Trison is a creature native to the unnamed world only known as Not Furya, the creature is only known from a skull found in Mercenary Station P7, it can be presumed that they are found in the tundra/grassland region surrounding the outpost.

Retrieved from "https://aliens.fandom.com/wiki/Trison?oldid=172233"
Community content is available under CC-BY-SA unless otherwise noted.