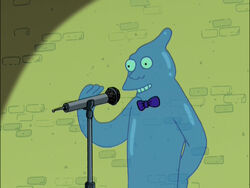 Futurama
Trisolians are a race of desert-dwelling creatures indigenous to the planet Trisol. 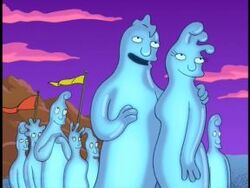 Trisolians have a liquid based physiology that holds the form of a standard humanoid, though can take the shape of any vessels in which they might reside. Their liquid bodies can be metabolized by other Trisolians, which is the common form of assassination in Trisolian culture. For this reason, Trisolians are very protective of being drunk by others. However the Trisolian form is able to retain cohesion after being drunk by Humans and thus they don't have to fear being assassinated by them and possibly species of similar physiology.

During the period in which all three of Trisol's suns have set, Trisolians enter their nocturnal phase, and emit a glowing light that is bright enough to be seen through Human flesh and bones.

Trisolian society appears to be fairly xenophobic of others; for example, the homogeneous population of Trisol and the great distance between their landing area and their capital palace, yet they are represented in DOOP and there are Trisolians in other areas of the Universe.

The arts seem to be an important part of Trisolian culture, with comedians and musicians holding relatively high status in the society as evidenced by the inclusion of such performers at state functions. Despite Trisolian's innate xenophobia and isolation, there was at least one comedian, Florp, who has taken employment elsewhere in the galaxy.

Despite their relative isolation, Trisolians are considered fairly mild mannered and have rather pleasant personalities. Though when it comes to court intrigues and the royal line, this is not the case.

Trisolians are usually found nude, possibly due to the restrictive nature of clothes on a near-liquid being. However, rich or famous members will dress in clothes, even if it is just a hat. They are ruled by a solitary monarch - the Emperor of Trisol. This monarchy is unique in the fact that each and every emperor ascends to power by assassinating (drinking) the current ruler. With this, the average life of a Trisolian emperor is approximately one week, and most are almost immediately killed - sometimes even at their own coronation. A Human by the name of Philip J. Fry once became emperor by accident when he inadvertently drank Bont the Viscous, the current emperor of Trisol. However, when Bont was discovered to have survived, Fry lost his rank and cried Bont out to keep from being murdered to save the emperor.