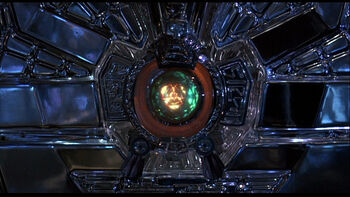 Flight of the Navigator

Paul Reubens (credited as "Paul Mall")
"Max" is a Trimaxion Drone Ship sent to Earth to study humans. He featured in the 1986 Disney film the Flight of the Navigator.

Capabilities -It is unknown whether or not the ship can move faster than light. If when Max took David to Phaelon and back, 8 years passed, which was due to time dilation, which occurs at near light speeds.

-Time Travel- the ship possesses the ability to travel backward and forward in time, as when it took David back to 1978

-The ability to move at over the speed of Mach 10, when it went 20 miles upward.

-Can speak thousands of languages and has the ability to change it shape to better suit it's movement.

Retrieved from "https://aliens.fandom.com/wiki/Trimaxion_Drone_Ship?oldid=163771"
Community content is available under CC-BY-SA unless otherwise noted.