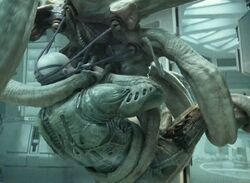 The Trilobite attacking an Engineer.

The Trilobite is a creature derived from the Black Liquid of the Engineers (a.k.a. Space Jockeys). The Trilobite can be considered a prototype version of the facehugger.

The Trilobite is a huge creature, strong enough to overpower an Engineer. It has multiple tentacles and smaller retractable tendrils which can hold the victim in place while it forcefully implants an embryo into the victim's body: an endoparasitoid larva that will develop and transform into the Deacon.

The Trilobite was created as a result of the Black Liquid being ingested by the Human Dr. Holloway, without his knowledge. The liquid spread through his system within a 24 hour period. Before realizing the changes taking place in his body, he and Dr. Shaw had intercourse, whereby transmitting some of the changed DNA to her in the form of sperm. She soon became pregnant. However, she had the rapidly growing alien inside her surgically removed via cesarean using an advanced medical device on board the Prometheus.

The creature, assumed to be dead, actually survived being removed from its mother's womb, and developed into a gigantic tentacled aberration; similar in some ways to a massive Xenomorph facehugger. Like a facehugger, its real purpose in life is to find and impregnate a host, which it did to the Engineer, implanting the embryo that would soon develop as the Xenomorph-like creature known as the Deacon, which emerges from its host by forcefully rupturing the host's chest with its strong, pointed cranium.