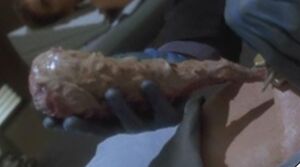 Pools in underground caves
Abdominal cavity of a host

Michael Westmore
Symbionts, a.k.a. Trill Symbionts, are a sapient vermiform species from the planet Trill. Like their name indicates, they spend much of their lives inside the bodies of humanoid Trill hosts in a mutually-beneficial symbiosis. However, due to the small number of Symbionts compared to the large Trill population, only a small minority of Trills are joined to Symbionts.

Symbionts are relatively large worm-like creatures which live in milky-white pools in the Caves of Mak'ala, where they breed. They're only able to leave these caves when joined to a humanoid host. When joined, they live in the host's abdominal cavity.

A host and their Symbiont are biologically linked to such an extent that removal of the Symbiont only 93 hours after initial joining will result in death to the host. Similarly, if the host dies while carrying a Symbiont, the latter can only survive by being medically transplanted into a new suitable host before it's too late. If the new host turns out to be unsuitable, rejection will take place in a period of three or four days, at which point both the host and the Symbiont will die.

The connection between host and Symbiont also takes place at a neurological level. The two minds merge into a new individual which combines the memories, skills and personality of host and Symbiont. Since the Symbionts live for centuries, they tend to inhabit a succession of different hosts, each of whom acquires access to the memories of the Symbionts' previous lives as well. Each new host is considered a new individual, neurologically distinct from previous "lives", as demonstrated by their brain waves being different.

According to Dr. Julian Bashir, joined Trills have two cerebral nuclei (i.e. two brains), one in the Symbiont and one in the host. These two brains are like two computers linked together, and do not function separately. While the Symbiont's brain pattern alone doesn't change, the input from the host results in a different persona by combining host and Symbiont, as well as the experiences and memories of previous hosts.

The synaptic functions that unite host and Symbiont are mediated by a neurotransmitter called isoboramine. If the isoboramine levels drop below 40%, it is customary for the Symbiont to be transplanted, sacrificing the life of the host in the process to save that of the Symbiont.

Not all Trills are suitable to becoming hosts. Although the Symbiosis Commission claims that only one in a thousand Trills are suitable hosts, this is actually a fabricated statement made to guarantee that the Commission itself oversees the tests and procedures for carefully choosing new hosts. In reality, nearly half of the Trill population could theoretically host Symbionts, but the number of available Symbionts isn't anywhere near that. The Symbiosis Commission justifies this deception by claiming that, if the population was aware that the number of suitable hosts exceeds that of available Symbionts, the latter would become "commodities to be purchased or prizes to be fought over".

Strictly speaking, the host to a Symbiont doesn't need to be a Trill, as Humans have become hosts in at least two cases, although these have been considered exceptional. William Riker becoming host to the Odan Symbiont was a temporary and emergencial measure and deemed medically dangerous. In 3188, however, a Human named Adira did successfully become permanent host to the Tal Symbiont. Trill hybrids can also be suitable hosts, as demonstrated by Yedrin Dax in an alternate timeline.

When not joined to a host, Symbionts live in the undisturbed pools of the Caves of Mak'ala, where their needs are tended to by unjoined Trill Guardians. A Symbiont may live for centuries before being joined to its first host. While living in the pools, the Symbionts communicate with each other by means of electric discharges.

The pools are also where the Symbionts breed, although it's not known whether they reproduce sexually or asexually. They seem to be genderless creatures, and the fact that they experience romance while joined might be a product of the host's mental influence rather than an insight into their natural method of breeding.

The Guardians tend to the Symbiont pools by monitoring environmental factors such as ion concentration, temperature and viscosity, claiming that the Symbionts get "cranky" if these parameters are not to their liking.

Nothing is known about the evolution and natural life cycle of the Symbionts, although the fact that they breed in the pools and don't seem to reproduce when joined indicates that they evolved as free-living creatures, and only adapted themselves to a symbiotic lifestyle later. It can be speculated that the symbiosis initially provided the Symbionts with mobility, perhaps allowing them to colonize different caves, while the Trill hosts benefited from the possibility of accumulating memories from past lives, giving rise to joined individuals that could easily act as leaders to their communities due to their unmatched experience. This is all speculation, though, and has never been confirmed or denied.

Although Trills have been known to interact with the Federation since at least the 23rd century, the Trill Symbiont remained unknown to outsiders until 2367, when a medical emergency forced Odan's host to reveal the existence of the Odan Symbiont to Dr. Beverly Crusher.

Many unanswered questions remain regarding the apparent discrepancies between Odan's and its hosts' biology and that of other Trills.

Due to the Symbionts having a much smaller population compared to the humanoid Trills, only a minority of Trills become host to Symbionts. New hosts are selected by a Symbiosis Commission. Since the Symbionts are fewer and live much longer, Trills consider them more valuable than hosts: if it is necessary to sacrifice a host to save a Symbiont, it will be done. When faced with death, hosts will insist that their Symbionts must be preserved, which also allows the host's memories (and even the host's persona, to some extent) to outlive their bodies.

Since each new joining creates a different persona, the different "lives" of a joined Trill are regarded as different people. New hosts aren't expected to be bound to commitments of a previous host, as demonstrated when the Klingon Kang released Jadzia Dax from an oath made by Curzon Dax.

Despite being naturally genderless and possibly asexual, Symbionts experience romance while joined. However, Trill society considers it a taboo for a Symbiont in a new host's body to re-associate with a previous host's lover. This stigma applies both to situations in which both partners are joined Trill (e.g. Jadzia Dax and Lenara Kahn) and in relationships with a non-Trill (e.g. Ezri Dax and Worf). On the other hand, Kareel Odan still tried to pursue a relationship with Beverly Crusher, although, as noted previously, the Odan hosts might actually belong to a different subspecies of Trill, which could differ culturally as much as biologically.

Unlike the case with romantic relationships, keeping friendships with previous hosts' associates is permitted and even cherished by Trills, such as Jadzia Dax keeping Curzon Dax's friendships with Benjamin Sisko and with the Klingon warriors Kang, Kor and Koloth.

Retrieved from "https://aliens.fandom.com/wiki/Trill_Symbiont?oldid=199585"
Community content is available under CC-BY-SA unless otherwise noted.