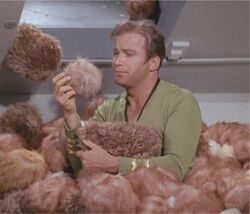 Used to be common; were temporarily wiped out by Klingons but reintroduced to the timeline afterwards

Tribbles (Polygeminus grex) are a species of small alien lifeforms which do little more than eating and reproducing constantly. These furry, rounded herbivorous creatures with no visible features come in several shades of brown, grey, cream, white or pink; can be from about ten to thirty centimeters long and move around by crawling rapidly or rolling.

Tribbles are physically harmless, but can be quite a problem due to their perpetual hunger and fast reproduction, as they reproduce asexually and are born pregnant. They emit purring sounds and are known to have a tranquilizing effect in the nervous system of Humans and possibly other species. Klingons on the other hand detest Tribbles and consider them a nuisance and a pest; causing Tribbles to become scared and agitated whenever they approach a member of the Klingon species. Captain Kirk once took advantage of this and successfully used a tribble to identify a Klingon spy disguised as Human.

In spite of this, in some point after these events the Klingons decided to end the tribble "pest menace" by bombarding the tribble homeworld, driving the species extinct. When the crew of space station Deep Space 9 traveled to the past to prevent the assassination of James T. Kirk by a Klingon agent, they also managed to bring a few tribbles to the 24th century, successfully reintroducing the species.

Retrieved from "https://aliens.fandom.com/wiki/Tribble?oldid=178834"
Community content is available under CC-BY-SA unless otherwise noted.